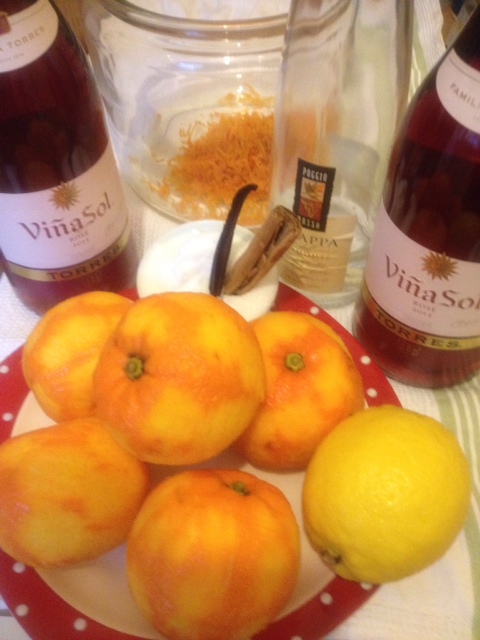 Whilst Marmalade is the staple of the British breakfast table, it’s not to everyone’s taste and most certainly it isn’t the only use for the delightful Seville oranges. We must be careful not to disregard marmalade though; it has seen a decline in consumption of over 6% since 2010 and sadly this is a trend likely to continue because the majority of Marmalade eaters are aged over 65. Marmalade production was deemed to be so crucial to the morale of the British public that special efforts were made to ensure the supply of Seville oranges during the Second World War. It is thought that Marmalade originated within Arab cultures and was originally made from Quinces in ancient Britain. It was in Dundee that the Scottish developed the Marmalade we know today.

Seville oranges (bigarade in Southern France) are a particularly tart variety of orange which is a hybrid between a Pomelo and a Mandarin and their bitter and sour flavor is reminiscent of lemons and limes. They originated in China before 2500BC and were cultivated in Sicily from the early 11th Century and then  introduced to the Seville region towards the end of the 12th Century (probably introduced by the Arabs). The Seville orange season is very short, lasting only a few weeks during January. Rather romantically this is one of the few truly seasonal fruits remaining, and the British passion for making Marmalade in the depths of Winter will hopefully keep it that way.

The thick, dimpled skin of the Seville orange is perfect for marmalade because the pith becomes transparent upon cooking with sugar and their high pectin levels give a good set. They are also used to extract an essential oil (Neroli) which is used in perfumes, as a solvent, and as a flavoring (Orange Flower Water).Bigarade oranges are grown within the Grasse region of Southern France; which is the largest western producer of Orange Flower Water. It is believed that the Sevilliano’s love of seafood and abundance of sour oranges lead to the creation of Ceviche which is a popular dish throughout the former Spanish colonies and has been adapted to use lemons and limes in the absence of the Seville orange.

Whilst thousands of kitchens around the UK are boiling vats of Marmalade in mid-January, instead I’m creating Vin D’Orange. Seville oranges work beautifully in Vin D’Orange because of their bitterness, which enhances the palette’s ability to detect the sweetness of the other ingredients: such as adding lemon juice to strawberries.  Although it’s still mid-Winter the oranges have the most beautiful summer flavours and Vin D’Orange makes the most exquisite aperitif whilst also being a very versatile ingredient in the kitchen.

I tend to use most of my Vin D’Orange in cocktails but its also delicious paired with rhubarb (which conveniently coincides with the end of the maturation period!) and makes a divine marinade for strawberries. For a simple yet exotic cocktail try mixing Vin D’Orange with fresh passion fruit juice and dry Cava with a dash of lime and ice. We make a delicious Cava-based cocktail to celebrate the start of our Strictly Catalan cookery courses; but you’ll need to come along to get that recipe!

If you can, source some really good cinnamon, it will make this recipe all the better. A fruity, preferably strawberry-scented, blush Rosé wine works best

A large kilner jar or similar; I use a biscotti jar.

Place the zest from oranges & lemon, the orange juice, the sliced lemon, sugar, vanilla, cinnamon, wine and grappa into the jar and stir it to help dissolve the sugar.  Cover and refrigerate (or store in a cool place – the garage would be fine) for 6-8 weeks, stirring from time to time.

After the 6-8 week maceration period, strain the finished liqueur through a sieve lined with a piece of kitchen roll or a coffee filter paper. And put into sterilized bottles, cork and serve from the fridge.

Depends on how sweet your tooth is, I only ever use 90g but I don’t like cloyingly sweet liqueurs. If you don’t have attractive bottles use the empty rose bottles.

« Kalonji & Carrot Naan Breads
Chickpea, Roast Onion & Piquillo Pepper Hummus »
Welcome to my blog, this is where you can read about my favorite recipes, travels and anything I love...