Vermut or not Vermouth, that is the question 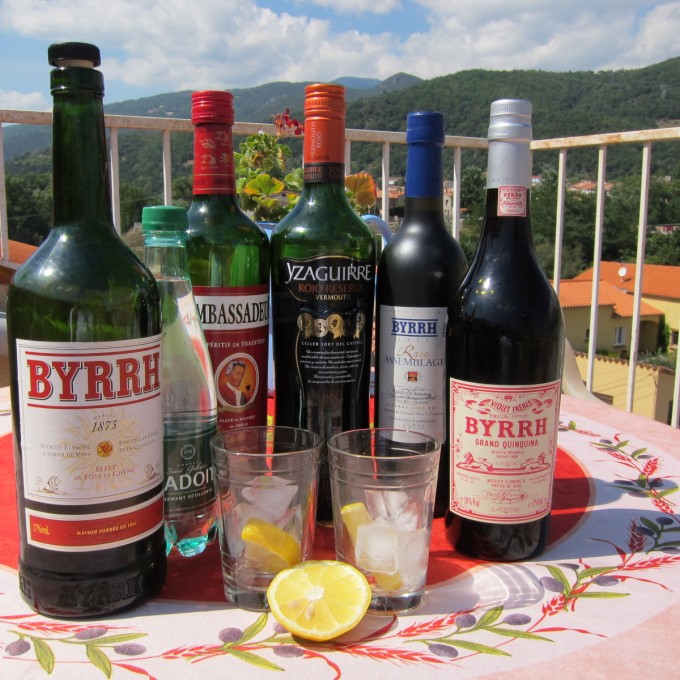 Whilst on a flight to Girona I read an article in the Weekend FT, by Paul Richardson, about the latest ‘on-trend’ drink favoured by the chic Barcelona-ites: fer vermut. I, like Paul Richardson, momentarily recalled the 1970′s TV adverts for Martini Rosso featuring Joan Collins and the memories of the sickly-sweet syrup we grew to know as vermouth sent a shiver down my spine! Vermut is a fortified-wine aperitif made using an assortment of botanicals to infuse flavour into the spirit. It’s name is derived from the German name for ‘Grand Wormwood’ (Vermut) which is a key ingredient in Absinthe; another botanical-infused spirit. Catalonia has made and consumed Vermut for hundreds of years and it was the drink of choice in the cafe’s following Mass. Due to it’s popularity many winemakers produced a ‘moonshine’ version of vermut as a sideline to their wine production. This beverage was often labelled “vino aromatizado” because a spirit licence was required to produce Vermut. Most of these colloquial producers ceased their sideline-trade long ago and the high-street brands met the dwindling demand. However, over the past year Catalonia has seen a revival of the tradition, including the emergence of several “vermuterias” dedicated to the production of Vermut, and the bar-flies of Barcelona have embraced the fashion so passionately that the fever is spreading…

Catalonia is Spain’s primary Vermut producing region and the capital, Barcelona, now boasts many locally produced Vermuts which are fueling this recent trend. Each is made from a locally-sourced base-wine which is fortified and infused with bark, roots, citrus and herbs. The end result is a bitter spirit; although they range from the incredibly bitter (popular with the Italian palate) through to the significantly less bitter (popular with those in the South of France).

I was intrigued and decided that it was time to investigate Vermut for myself. Of course all the best laid plans encounter difficulties along the way, and my initial problem was actually finding fermented Spanish beverages now that I had crossed the border into France and arrived at my home in the Vallespir. Over the years I’ve come to realise that even the mainstream supermarkets do not stock Spanish alcoholic beverages, and to be fair- why should they?!- they have an incredible range of their own home-grown alternatives. Sherry in particular is not, and never has been, readily available on the French side of the Pyrenees, so my chances of sourcing a Spanish Vermut were extremely unlikely! I headed to the local Spar in search of ideas and found the local equivalent to Vermut: I carefully selected a bottle of Ambassadeur (made in Thuir) because it was the cheapest (the 70′s did not leave me with a love for vermouth!) and the list of ingredients sounded very pleasant: bitter orange, vanilla, and aromatics with notes of cherry and redcurrant. I grabbed a lemon and a couple of bottles of Badoit and impatiently waited for everything to chill in the fridge.

Nervously I mixed my lunchtime apero and armed with some salted peanuts I headed to the roof terrace. I was back in the kitchen within 10 minutes- it was delicious- refreshing, uncomplicated, and thirst-quenching! Not wanting to peak too soon I grabbed my bike and headed to the local Intermarche (well I couldn’t really go back to the Spar having only just purchased a litre of Ambassadeur could I?!) to pick up a bottle of locally produced Byrrh.

Byrrh has been produced in the Thuir valley since 1866 and was originally used for medicinal purposes, with limited success, but found greater popularity when marketed as an aperitif. It was made by the Violet brothers and the factory now produces Cinzano, Dubbonet and Ambassadeur. Incidentally, Dubbonet was developed in Paris by a chemist with the hope of making the French Foreign Legion’s anti-malarial quinine doses somewhat more palatable. The Violet brother’s ambition also lead to the construction of the Thuir railway depot on the site by Gustave Eiffel (the concourse is very impressive but sadly no longer in use). The traditional Byrrh is made from a local wine (usually Muscat, Grenache and Carignan), a variety of aromatics, and Quinquina (a Peruvian bark which is used to make tonic waters).

I raced home and mixed my next aperitif exactly as before- 2 parts ice, 2 parts Byrrh, 1-2 parts Badoit and a significant squeeze of lemon juice. The Byrrh was slightly less sweet than the Ambassadeur but the flavour was more complex with hints of orange and vanilla. There was a bitter greenness to the back of the palate and the red wine was not lost amongst the aromatics. A definite leap towards sophistication compared to the Ambassadeur.

A few days later I picked-up a bottle of Yzaguirre in Torroella de Montgri (in the Emporda area of Catalan Spain). Yzaguirre is a vermut produced in El Morell, Tarragona. Yzaguirre is a red vermut which has a vivid caramel colour and when mixed, as before, tasted of apple and caramel but with a savoury finish. This aperitif was more serious and had less friuty and herbal notes than the Byrrh and the Ambassadeur. It went very well with salted almonds and olives.

Having become quite a fan of Vermut, I decided to test it’s popularity amongst a small group of friends. Given that it has been quite a few years since vermouth was last fashionable I felt that it was only fair to test it upon those fortunate enough to remember the 70′s and 80′s! So armed with the best part of three litres of Vermut I headed for the local book group: ‘Book Worms’. Things started slowly, with some protestations that vermouth belonged in the 70′s, but soon everyone had a favourite scribbled onto their shopping list. The majority preferred the Byrrh, but the Yzaguirre picked up one vote and the Ambassadeur two votes (most found it too sweet). One Book Worm recalled certain times of year when the storm gulleys, running along the side of the roads in Thuir to channel the melt-water from Le Canigou, were gushing with gallons of Byrrh; the whole town awash with the heady aroma of the aperitif! Maybe a result of some serious spring cleaning?! My thanks go to the Book Worms for embracing Vermut…again!

I struggled to pick a favourite from the Yzaguirre, the Ambassadeur and the Byrrh; they are all so different and lovely in their own right. I suspect that the vermouths produced by Byrrh would appeal to the British palate because they are fruity and more ‘approachable’. One thing is very clear; there is a Vermut out there to suit everyone’s tastes! I know I have barely scratched the surface on this revived aperitif, and having developed quite a taste for this refreshing beverage, I shall certainly continue to investigate! I will be visiting the Byrrh factory in Thuir on my next trip out to the Vallespir and will report back on my findings!

I have made a slight addition to the traditional recipe for a traditional vermut: I hope you enjoy it!

2 parts Ice (add this to the glass first)

« Chicken Baked in Vinegar
Stuffed Moroccan Flatbreads »
Welcome to my blog, this is where you can read about my favorite recipes, travels and anything I love...