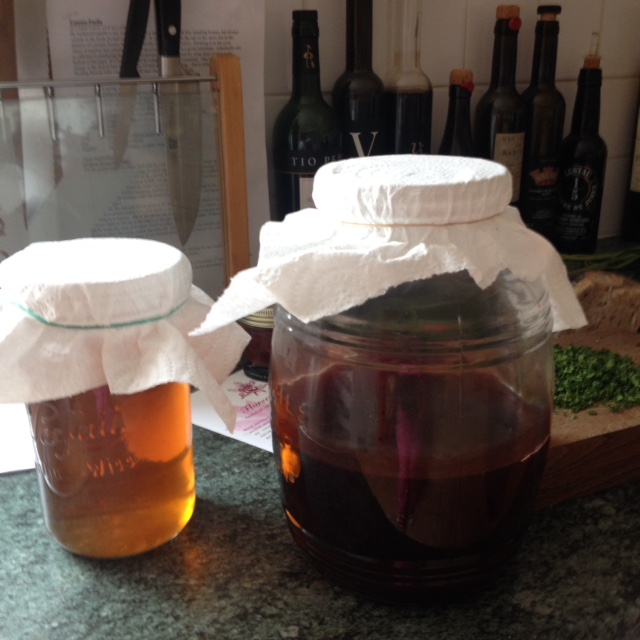 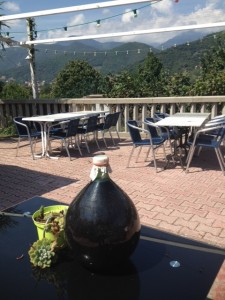 The transformation of good wine into great vinegar happens so satisfyingly easily and the vinegar will taste so much better than any vinegar you are likely to buy. Homemade vinegar is delicious; packed with a sophisticated complexity of flavour, fruity aromas, atogether so much more than just ‘acidity’. Avoid using wines with high sulphur content as the transformation from wine to vinegar will be significantly less successful. Low sulphate wines will inevitably transform into vinegar when a natural bacteria, found in the atmosphere, converts the alcohol content of the wine into acetic acid and water.

A delicious vinegar is essential for a salad dressing, but also so much more. Several of my recipes within this blog require good wine vinegar and you’ll find it a very versatile ingredient.

I’ve been making vinegars for several years now, and usually have two in development at a time- one red wine vinegar and one cider vinegar. I must confess that I often leave my vinegar jars untended for months at a time before decanting the ‘ready’ vinegar for bottling. Fortunately this neglect doesn’t seem to affect the finished product which leads me to believe that even the busiest household could produce it’s own vinegars.

There is one rule which I never break however: I never put wine into my vinegar jar which I would not thoroughly enjoy drinking. You can easily waste money buying vinegars off-the-shelf but you will never waste money buying great wine to make vinegar from.

To get started you will need a large glass jar- anything from two litres upwards, with a reasonably wide neck. I use glass jars so that I can watch the process happening. I use a lot of vinegar and so have a four litre Kilner jar to make my red wine vinegar in, and a smaller one for making cider vinegar in.

Start with an organic red wine or cider. Many good wine makers elect not to label their wine as organic although they use little or no preservatives in their wine-making. Choose a wine with a low-ish alcohol content (up to around 13%). Most white wines contain too much sulphur, which will inhibit the vinegar bacteria (known as the vinegar mother) so I suggest sticking with red wine. I suggest that you ask your wine merchant or wine maker for some advice on the best options available to you, and remember to taste the wine (it must be delicious!). You will only need one bottle of ‘organic’ wine to get your vinegar mother established.

Firstly, drink half the wine! (You won’t need the entire bottle for the initial stage of vinegar making).

Pour half the bottle of wine/cider into your jar. Cover the neck of the jar with a piece of kitchen roll and secure it in place with a rubber band. Leave the jar somewhere dark but with some air-flow.

A naturally occurring vinegar mother (the bacteria required to change wine/cider into vinegar) will take a couple of months to evolve. During the first stages you may see a light film start to develop over the surface of the wine/cider. This will evolve into a disc of jelly (cellulose). You can buy vinegar mothers (Amazon sell them for example), but developing your own is far more satisfying! As the vinegar mother develops you should notice that the contents of the jar begin to smell ‘vinegary’.

During the initial weeks I don’t add anything further to my jars- I wait until the vinegar mother has developed. Once you see signs of the vinegar mother developing you can start to add additional wine to the jar. Once the vinegar mother has developed there is no need for the wine you add to be organic, but it is best to source wines with low sulphur content; if the sulphur content is too high it will kill/stop the bacteria from developing. I add approx one glass of wine per week. If you add a minimal amount of wine each week (i.e. one glass or less) it is unlikely to overwhelm the process should the wine be a little high in alcohol (15% or more) or sulphur. Some people recommend diluting wine with a high alcohol content before adding it, however, I avoid doing this because it dilutes the final flavour of the vinegar so I add the wine in small amounts instead.

If you are lucky enough to have an old fashioned pottery vinegar jar or a vinegar barrel, they will have two openings: one in the top and one a few centimetres above the base which is plugged with a cork that holds a tap in place. The tap makes the bottling process very easy.

Taste your vinegar on a weekly basis and when it has developed a flavour that you like, simply fill storage bottles from your vinegar jar (either using the tap or by pouring from the top of your vinegar jar). Make sure that you leave around 10 centimetres (a couple of inches) of vinegar in your jar so that you retain some of your vinegar mother and can continue to add wine and produce more vinegar.

When bottling your vinegar try to fill the bottles so that there is very little airspace between the surface of the vinegar and the cork. The cork should fit snugly into the neck of the bottle so that it prevents and further bacterial activity. The vinegar will keep for several years, and will possibly mellow and improve with time. I haven’t managed to produce enough to meet my needs and leave enough to lay-down a supply to mature! A large portion of my vinegar goes into homemade chutneys, and since using my homemade vinegar the difference in flavours has been stunning.

The thick jelly element of the vinegar mother tends to sink to the bottom of your jar. I recommend removing it once your vinegar is well under-development. This is easier to do if your vinegar jar has a nice wide opening!

Over the years I have had a coupe of occurences of ‘nail varnish’ aroma. The first time it happened I threw away the contents of my vinegar jar, washed it out, and started again. The second time I was dashing out of the house for a few weeks on a cooking job and forgot to empty the jar…when I returned a month later the aroma had gone and the vinegar was back on-track??!!

Edward Behr has written a couple of very helpful and instructive essays on vinegar-making. It was these essays which inspired my to start producing my own vinegars. One essay fcourses on Edward’s experiences of making vinegar (Art of Eating, quarterly newsletter, Issue 68, published in 2004). Another focuses on vinegar producers in France (Art of Eating, Issue 30, published in 1994). Both essays are available from artofeating.com.

So…what should you do with all this lovely vinegar?!! Vinegar is a wonderful addition to your seasoning arsenal. Use it in salad dressings, soups, braising liquors, sauces and gravies. I add a dash to sweated/sautéed/caramelised onions. Steamed Cavolo Nero is delightful with a sprinkling of vinegar and generous seasoning. I add a tiny drizzle to cooked dishes if they don’t require any more salt, but need a little extra ‘bite’; vinegar will fill many  a flavour gap. A word of caution however, use vinegar sparingly when adding to complete dishes; the objective is not to taste the vinegar as such but instead for it to highlight the flavours already created.

There are many traditional Italian, Spanish, and French dishes which use vinegar as a braising liquor (see my chicken baked in vinegar blog from Ocover 2013). Other examples include the scrumptious, versatile, and one of my all-time favourite Sicilian dish: Caponata, when made with homemade red wine vinegar this dish is really set-apart. Another of my favourite dishes is from the ‘Zuni Cafe Cookbook’ (an excellent cookery book!) written by Judy Rogers: Hot Chicken Salad. This dish has freshly roasted chicken and huge sourdough croutons, but what really makes it special are the currants soaked in homemade red wine vinegar for at least 8-12 hours. So that they are plump and bursting with flavour. Let’s be honest, if you’re going to make the effort to soak dried fruits at least give them sufficient time to absorb the flavours and liquids (in this instance the vinegar)- an hour or two really won’t do the job!

I love to slowly braise shallots in cider vinegar and olive oil to serve alongside roast pork. I cook them covered with a lid for the first hour and then take off the lid and turn up the heat slightly, cooking them until they are soft, and golden brown, and glazed with the vinegar. These shallots will keep within the fridge for several days.

So…it’s time to start your vinegar! Over the coming months I will post recipes for Caponata, courgettes preserved in vinegar, and mint and fig chutney, all of which will showcase your homemade red wine vinegar!

« For all you ‘CookWorms’…’Sourdough Suppers’ is coming soon!
Sourdough Suppers…now available!! »
Welcome to my blog, this is where you can read about my favorite recipes, travels and anything I love...