The only sourdough in the village 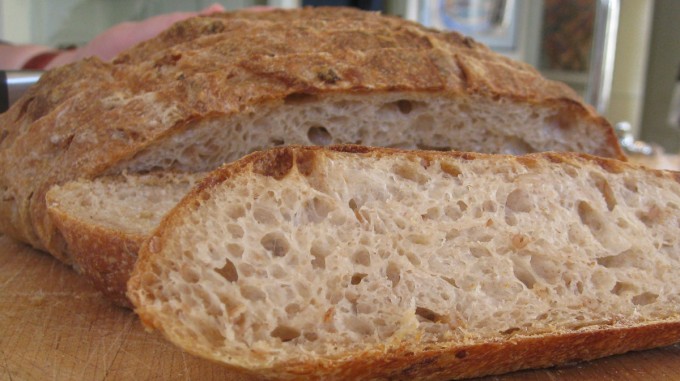 It was conceived well over a decade ago in Rhinebeck, New York using organic grapes, a copy of Nancy Silverton’s instructions on how to capture a sourdough yeast culture, a large plastic tub, some flour, and a square of muslin (see La Brea Bakery for detailed instructions). Its gestation period was 2 weeks, during which it transformed from a bright yellow festering mass into a pale and lively sourdough yeast culture. And so my sourdough culture was born on a summers day in the apartment in Clinton Corner which I rented from David Bean (a ‘Jet’ from the film West Side Story) and his eccentric wife Jeannie, a retired actress.

Jeanie has always been an incredibly supportive friend and in the early days of my career she regularly volunteered her time and efforts to waitress for me. With hindsight it is now clear that Jeanie was probably not waitress-material, but I am ever so grateful to her for trying! It was my dear friend Jeanie who very graciously agreed to waitress for me at a lunch party at the home of, the then, Libby Mavroleon (heiress to the Camel Cigarette Empire). The guests arrived and we served canapés. Jeanie is vivacious and wonderfully easy to talk to and soon she was working the crowd and interacting with the guests as only an actress can. Jeanie enigmatically suggested to Donald Trump’s mother that perhaps Donald Trump should consider changing his hairdresser. After receiving a sharp glance, Jeanie made a swift exit and fled to the kitchen. Although that was nothing compared to the debacle which unfolded later in the day! The party was in full swing and my Paella, in the capable hands of Jeanie, made its grand entrance across the terrace. I watched happily from the sidelines and then, to my horror… Jeannie stumbled just as she reached the table. My Paella was air-born! I looked on, unable to even breathe let alone help, as the slow motion scene unfolded before me. Poor Jeanie tried desperately to catch the giant pan but instead managed to, rather unceremoniously, tip half of the Paella down the unsuspecting neck of Donald Trump’s mother. I was mortified but both Libby and Donald Trump’s mother took the incident in good humour.

Anyway, back to the matter in hand: my sourdough culture, now alive and kicking!

During its life it has travelled thousands of miles around the globe accompanying me in my role as an itinerant private chef. It has made every style of bread from brioche to pita, and has been enjoyed by millionaires, trillionaires, Dukes, Duchesses, Lords, Ladies and even a Prime Minster and a Princess. Despite this, it still remains down-to-earth and is equally happy when making the perfect bread for a chip butty.

Things haven’t always been easy between us; once on a flight to Cork it exploded inside my suitcase, encasing every item of clothing with a thin layer of ‘batter’- not a good look! We then caused mayhem at Stansted airport when I innocently packed it in what turned-out to be the WRONG 100ml container and after begging a teaspoon from a cafe I then spent 45 minutes poking small dollops through the tiny neck of the RIGHT 100 ml container to enable us to continue our journey albeit somewhat depleted.

It has survived on its own, dormant in my fridge for 5 months whilst I’ve travelled alone. Then faithfully revived after a little TLC and returned to baking fitness within mere days.

It has diligently provided ‘offspring’ upon demand and the ‘family’ is now spread amongst many of Leith’s School of Food & Wine teachers and students, Cambridgeshire’s sourdough enthusiasts, and Divertimenti fans.

It reached celebrity status for being the main star in the very first UK Slow Food Sourdough Workshop and perhaps the very first sourdough workshop in the UK, now more than a decade ago.

I’m confident that it was the only sourdough culture in the village at that time, but thankfully the proverbial closet is finally fully open and the world is now packed with enthusiastic sourdough bakers both amateur and professional.

« Cook and stay in French Catalonia
The Elusive Cronut… »
Welcome to my blog, this is where you can read about my favorite recipes, travels and anything I love...