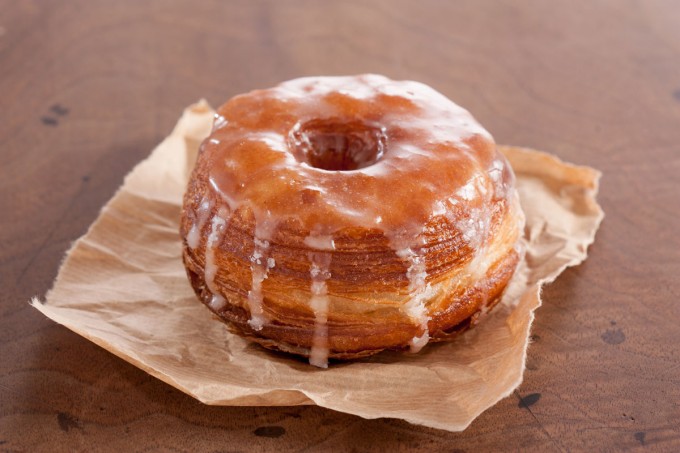 The recent months have seen a media frenzy over Dominique Ansel’s trademarked breakfast pastry invention the ‘Cronut’, which has been rapidly followed by a barrage of other doughnut-croissant hybrids such as the ‘Dosant’, the ‘Croque Croissant’ and the ‘Cronetto’. Surely something this decadent must be delicious…I had to find out!!

Fortunately my hungry friend from Epsom was New York bound for a few days and given his love for nightclubbing his nocturnal tendencies would provide me with the perfect opportunity to procure a Cronut from the Ansel Bakery in Manhattan. I briefed him on his mission and bid him farewell, then proceeded to countdown the minutes until his return.

Unfortunately things did not go to plan. Despite joining the queue outside the Ansel Bakery by 5am each morning, my now very hungry friend was too late and missed-out on the day’s Cronuts every time. My hungry and rather apologetic friend returned to the UK empty handed. I needed a new plan of attack!

Lucy (the owner of Stickybeaks Cafe) was breakfasting at the Duck & Waffle the following weekend; reportedly the only place within the UK to be serving a version of the Cronut. Not quite the Cronut, but surely the Dosant would be an excellent alternative. I briefed Lucy on her mission…and pointed out my hungry friend’s failure just to emphasise the importance of her task!

Unfortunately things did not go entirely to plan. It would seem that the Dosant must be particularly scrumptious; despite leaving the Duck & Waffle whole it arrived upon my doorstep as nothing more than a mere morsel, at most a mouthful!

I delicately placed the piece of Dosant on my kitchen table, turned on the light, and leaned in to inspect this elusive (and now rather miniscule) delicacy. Upon closer inspection it appeared to be made from deep fried croissant dough which had been filled, after cooking, with lemon pastry cream; similar in principle to the Cronut, but not quite the same as the laminated dough apparently used by the Ansel Bakery. Without thinking I popped the succulent morsel into my mouth and promptly ended my speculation upon the Dosant.

The following weekend I had enjoyed a lovely late lunch with my sister and niece at Valvona & Crolla in Edinburgh when my beady eye (clearly still subconsciously hunting!) caught sight of something which resembled a much larger version of the tiny morsel delivered to my doorstep the previous weekend. I was not going to be stopped so close to capturing the elusive Cronut and grabbed the iced doughnut from the shelf then raced over to the cashier and thrust it into his stunned face demanding (in my excitement) to know what this unusual-looking iced doughnut was and throwing terms such as ‘Cronut’, ‘Dosant’ and ‘Cronetto’ at his bewildered face. Eventually, after I calmed-down, he confirmed (with some very enthusiastic nodding) that it was indeed a version of the Ansel Bakery’s breakfast pastry. I paid and carefully transported my prized possession back to my hotel room for analysis.

I took a tiny nibble to expose the inner workings of the elusive Cronut. It was delicious, and one nibble lead to another until half the Cronut had been consumed and I was exhausted from my efforts to identify how it was made! I placed the remaining half on my bedside table ready for further inspection in the morning.

After a good night’s sleep I returned to my analysis. The Cronut, now a little shrivelled, looked to be made from a series of sheets of brioche dough or croissant dough which had been rolled very thinly and stacked on-top of each other. Two of the layers had been spread thinly with crème patisserie. The layered sheets were then cut into circles with a centre circle also removed, to resemble a ring doughnut. The Cronuts were then proofed, deep fried, and drizzled with icing.

Satisfied with my deductions I devoured the remaining half of the Cronut and pondered whether this decadent pastry was really worth all that effort, and as I licked my lips I decided that it probably was and set off to Valvona & Crolla – just to make sure!

« The only sourdough in the village
BC: Before the Cronut »
Welcome to my blog, this is where you can read about my favorite recipes, travels and anything I love...