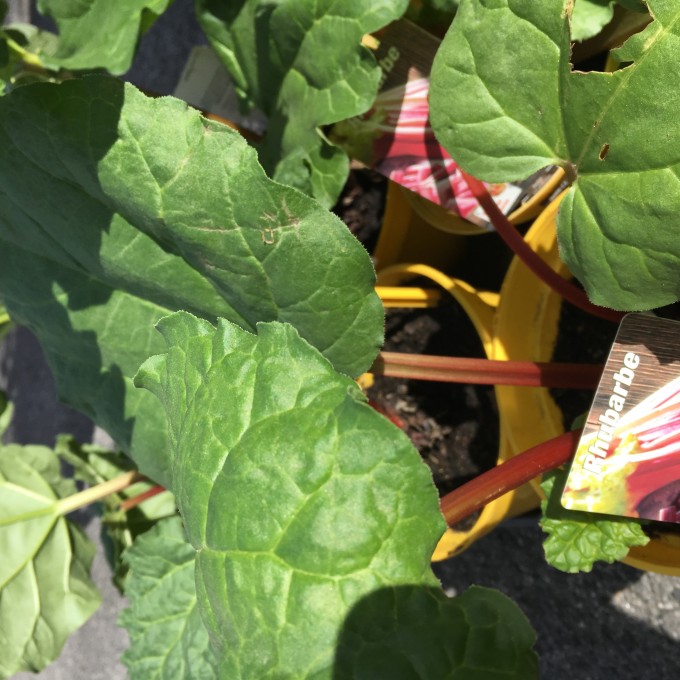 My test and development kitchen is waking up and so is my hunger for fresh and colourful things after a dark winter, although spring did come pretty early for us in our little corner of France.  Global warming gives us every reason we need to shop and cook locally and seasonally – Is it my imagination or has rhubarb appeared on the French markets, notably in the Vallespir, very recently in the last few years, having cooked in France professionally on and off over the last couple of decades it has never caught my eye. I thought of it as a quintessentially Yorkshire  (via Siberia and China) thing?  I saw pots of it lined up on Amelie market ready for planting.  Right or wrong it seems an opportunity for Anglo/French relations to bring together the ‘forgotten’ brioche and the tart rhubarb.  In a crumble stewed is by far the best but a dish like this, baking is the way to go as the rhubarb holds it shape so well. Particularly delicious served warm with a dollop of white chocolate and blood orange ice cream or simply a spoonful of very cold creme fraiche.

drizzle over the juice from one large orange and the zest, sprinkle over about

excess juice into a small pan, reduce a little to concentrate the flavour.

100g Rancio, Rancio Sec or a Rivesaltes, include juice from baked rhubarb

75g Almonds from the Alberes, leave skins on and finely grind

Beat the butter and sugar until white and fluffy, beat in the egg and fold in the ground almonds.

Drizzle each slice of brioche with a tablespoon of the wine/juice mixture, give it a minute to soak in then spread each slice generously with the butter.  If slices large cut them in half diagonally.

Place the slices, butter side up on a baking tray and bake until light golden brown and crispy at the edges – about 5-10 minutes.  Remove baking tray from oven and turn the slices over.  Divide the fruit evenly over each slice, tending towards the edge creating a crater in the middle, drizzle over any remaining wine/juice mixture.

Dollop the frangipane into the crater and over the top of the fruit (there may be a little left over), the recipe can be prepared in advance to this point, keep in a cool place until ready to bake.

Bake for about 6-8 minutes, then reduce to 150C until golden and frangipane has almost baked – a little runny in the middle is good.

« Celebrate in Style With Oven Braised Lamb Mechoui
Sourdough Suppers available as an ebook »
Welcome to my blog, this is where you can read about my favorite recipes, travels and anything I love...