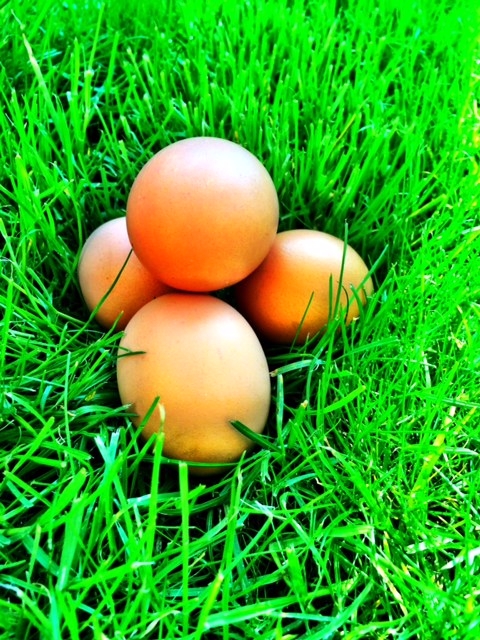 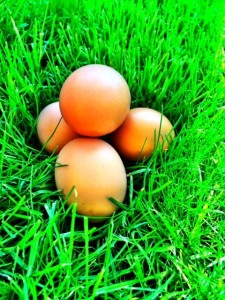 A personal favorite of mine is an egg and salad cream sandwich, which to some may sound a little odd, but before you dismiss the idea give it a go! This deconstructed version is a little more sophisticated but is equally tangy, fresh and delightful! The crowning glory is the mountain of chunky croutons; almost more than a mouthful and coated in melted cheese which add both texture and a touch of umami.

Salad Cream is one of Britain’s best kept secrets. For those who are unfamiliar with this pale yellow condiment; it is used in a similar fashion to Mayonnaise but has a tangy yet creamy flavour which is derived from vinegar and cooked egg yolks, amongst other ingredients. It is believed that Heinz invented Salad Cream in 1914, after which it rapidly rose in poularity during the 20th Century; particularly amongst the working classes and during the Second World War, as a means of adding flavour to bland meals. Ironically this was quite possibly the reason for a decline in the consumption of Salad Cream from the late 1990′s when Mayonnaise, with it’s exotic Mediterranean roots, became increasingly popular in the UK. The fate of Salad Cream was almost sealed in 2000 when Heinz threatened to cease production entirely, but a desperate campaign lead by the remaining fans managed to increase sales and position Salad Cream as a cheaper and lower-fat alternative to Mayonnaise. Although Salad Cream is now available in a squeezy bottle, I prefer the traditional glass bottle; this is not for reasons of vanity but simply that the Salad Cream is thicker and more unctious from a glass bottle. This recipe celebrates 100 years of Salad Cream- go on, give my homemade version a go!

250g of Asparagus with the ends trimmed

250g of slightly stale Sourdough (or any good loaf) cut into thick 2.5cm slices then torn into large bite-size pieces

75g Wenslydale (or any other zesty hard English cheese)

Small bunch of Chervil (if you can source it)

For the Salad Cream:

2 of the cooked yolks from the eggs for the Salad

Place the 2 egg yolks into a medium bowl and mash them with the back of a fork. Add a pinch of salt, the white pepper, and both types of mustard and mix to form a paste. Stir in the yoghurt and the vinegar to loosen the paste. Whisk in a trickle of the olive oil, gradually increasing the trickle to a steady drizzle. If the salad cream starts to look oily, stop drizzling and continue to whisk until the oil has emulsified. Adjust the seasoning if required then cover and refridgerate until required (it will keep for several days). In this instance we want to drizzle the salad cream over the salad (like a dressing), so if it has thickened in the fridge, simply mix in a little warm water to loosen. Just before you drizzle the salad cream onto the salad snip-in a few chives.

Steam the asparagus until it is just tender. Cut the spears in half and set aside, keeping them warm.

Cut the 3 whole boiled eggs into quarters and chop the remaining white from the 2 eggs minus their yolks into pieces too.

Cover a serving platter with the larger lettuce leaves. Sprinkle over the chopped egg whites and half the capers (if using), snip a few chives, and arrange the bottom halves of the asparagus (saving the tips for the top layer), a few of the egg quarters, and half the croutons. Drizzle over some of the salad cream. Repeat a second layer using the smaller lettuce leaves and the asparagus tips. Finish with a drizzle of salad cream and any remaining croutons.

« Sourdough Diaries: 10 Facts About Sourdough
Jersey Royal Potato Bread »
Welcome to my blog, this is where you can read about my favorite recipes, travels and anything I love...