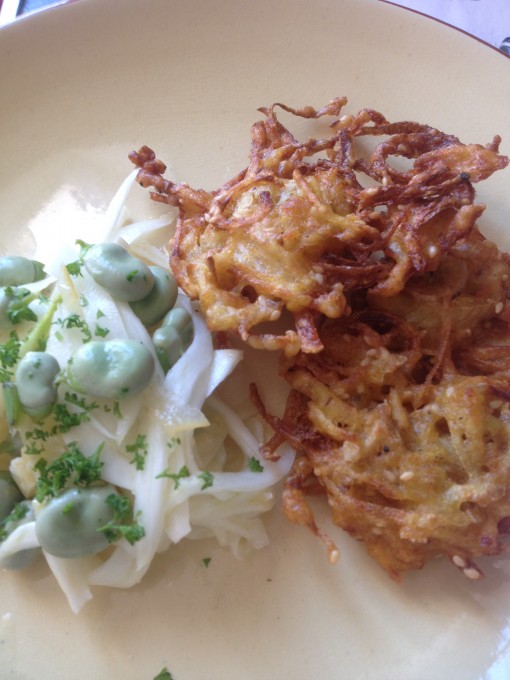 In the Vallespir the Broad Beans arrive in April. I love to make the most of the young tender beans. However, if you’re using older Broad Beans I highly recommend going to the trouble of  podding, blanching and removing the tender green kernels from the skins.

I love this salad served alongside the Spicy Sourdough Onion & Potato Fritters.

Handful of Coriander or Mache

Mix the fennel, preserved lemon, juice of 1/2 a lemon, salt and white pepper in a medium bowl. Leave the mixture to marinade for 24 hours, if possible (if not then for at least a couple of hours). Toss the mixture occasionally.

Just before serving, pod the broad beans and blanch them for 2 minutes in boiling water. Immediately drain them and leave to cool for a few minutes.

Toss the beans and coriander into the fennel mixture. Drizzle with a little olive oil.

« Wonderfully Versatile Spicy Sourdough Onion & Potato Fritters
Tartiflette »
Welcome to my blog, this is where you can read about my favorite recipes, travels and anything I love...