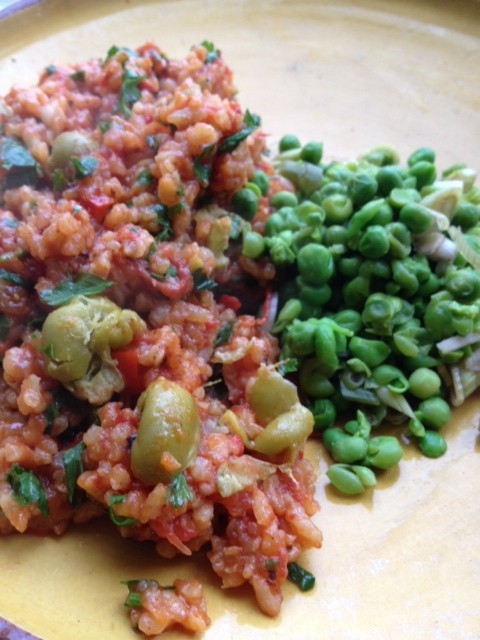 Paella began as a dish for farmers and farm labourers in Valencia and was cooked outside over a wood-fire by the men at lunchtime. The workers added whatever ingredients they had available. The dish was traditionally eaten straight from the pan with each man using his own wooden spoon. It is traditional to start eating the paella from the outside and work inwards.

The name ‘paella’ is derived from ‘la paella’ which is the cooking pan itself. The Valencians had their own language, which had similarities to Catalan, and the name was likely derived from the Latin ‘patella’ meaning ‘pan’ although there are many myths and legends surrounding the naming of paella. One such legend claims that the dish was made by a lover for his fiancée and that the name was derived from the Spanish ‘para ella’ (for her). There is an old story of how the Moorish kings’ servants created rice dishes by mixing the left-overs from royal banquets in large pots to take home. The name could be derived from the Arabic word “baqiyah” meaning left-overs. Paella has become a generic term for a vast number of Spanish rice-based dishes.

Valencia is one of the largest natural ports in the Mediterranean and was amongst the most important rice-producing regions in Spain since irrigation was installed within the region by the Romans and rice was introduced by the Moors (over 1.200 years ago). There is no set recipe for paella, and as ‘Valencian Rice’ became more widely available across Spain the content of paella varied depending on the ingredients available in the local area. It is thought that the original paellas contained a variety of duck, chicken, rabbit, snails and beans.

‘La Paella’ has evolved to become a flat-bottomed shallow pan. Even the giant paella pans used for fiestas and feasts vary little from the standard depth of approx. 5cm. The pan typically features a number of dimples in the base. These trap small amounts of liquid and thus promote even cooking. They also help the pan to retain its shape, making it rigid and preventing warping. The original pans were hammered by hand and would have featured ‘natural’ dimples. The pan is not ‘non-stick’ and a certain amount of ‘sticking’ is encouraged to form the ‘socarrat’ (the crusty bottom layer of the paella).

My interpretation of paella is vegetarian (other than the chicken stock); but on occasions I have added shell-on prawns, leftover roast chicken, and an assortment of other meats and seafood if the fancy has taken me. This dish is definitely tasty enough to stand alone though and really doesn’t need the addition of meat or seafood.

I find that the best way to develop a good socarrat is to cook the paella in the oven (in the absence of a paella burner). One tradition I definitely wouldn’t change is to leave the dish to stand for 20 minutes before serving. I think this dish is best served with a pea salsa and a loaf of Pane Pugliese. You could sprinkle over some lightly-toasted pine nuts towards the end of the cooking time if you would like to add a little ‘crunch’.

2 fresh onions- trimmed and cut into 1/2cm slices, including the green stalk (or 6 spring onions)

Put the paella pan over a medium heat and add the olive oil, 3tbsp of water, the onion, the garlic, the red pepper, and seasoning. Sweat the vegetables until soft, this will take approx. 30 minutes and you may need to add more water to prevent the vegetables from browning. When the vegetables are soft, allow them to fry for a couple of minutes to evaporate any residual water, but without allowing them to colour.

Add the fresh and pulped tomatoes, a pinch of salt and crumble the saffron into the pan. Bring the pan to a gentle simmer and cook for 20 minutes until the tomatoes turn a deep red colour.

(At this point you can decant the mixture from the pan and store it for a couple of days.)

Sprinkle the rice over the sauce and stir-in. Pour over the stock and a generous pinch of salt. Bring to a simmer.

Move the paella pan into the oven and bake until the rice is soft and starts to brown at the edges of the pan. This will take around 55 minutes. If the paella looks dry during cooking, add some more stock or water and stir it in.

When the paella is cooked, stir in the olives and parsley. Check the seasoning and allow to rest for a few minutes before serving.

If you can get hold of some fresh peas, then do so, but if not this salsa is just as good with frozen petit pois. You’ll need to blanch fresh peas for 2-3 minutes before using. It can be difficult to source chervil in the UK, and so you may need to substitute it with mint instead. I recommend using the best quality vinegar you can find- one with lots of flavour and depth.

Just before serving blanch the peas for 1 minute in boiling water. Drain them and cool them quickly. Crush the peas a little with the back of a fork- just enough to break most of them up.

When you’re ready to eat, add the garlic, onion and vinegar to the peas and stir in the herbs. Serve the salsa immediately whilst the peas are a beautiful vibrant green.

« Morels with Asparagus & Potatoes
Courgette En Fleur »
Welcome to my blog, this is where you can read about my favorite recipes, travels and anything I love...